หน้าแรก > Review: Peek at the Differences between the Old Honda Scoopy Review: Peek at the Differences between the Old Honda Scoopy

All New Honda  Scoopy  2021 finally comes with the latest generation. Now he has entered the fifth generation. Many changes were made to the new Scoopy. Almost all sectors received updates. The selling price starts from IDR 19,950,000 OTR Jakarta. So what is the difference between the old All New Scoopy 2021 and the new one? Check out our review:

1. The design is getting thicker with a retro feel

The design is the most highlighted part. Although the concept is still the same, now it looks more retro. This is manifested by its increasingly rounded body. Most noticeably on the front. The body shield reflects the old motorbike. The oval headlamp is made even more flattened, so that the round impression is more pronounced. The difference with the previous model is the location and shape of the turn signal. Now separated and made dynamic, in harmony with the facade. For the technology, it still adopts an LED projector complete with DRL additions.

The rear also does not escape refreshment. The stop lamp mica model is made completely round, and separated from the turn signal. Very different from the previous generation which tended to stick with stoplights. As a result, it strengthens the retro impression.

The side body area actually hasn't changed much, it still adopts the S body line (shape). There was only a slight correction to the curvature of the design. Still shows a modern and unique impression. Still in the same area, striking changes can be seen on the passenger footrests. Now designed dynamically, alias can be folded when not in use. Aesthetically, it's getting better.

The fender model is also in harmony with the body, rounded. But now three holes are added to the right side of the front shield. The manufacturer seems to want to add a sporty impression to Scoopy. While the 12-inch rim design is now slicker. There are slats on each bar, completing an even more retro look.

The rest is about packaging. The latest Scoopy now has four variants with a total of 8 colors. Categorized according to theme and completeness of features. The bottom variant is filled by Sporty and Fashion. Upscale there are the Stylish and Prestige series. They bring a complete new feature, the smart key system. Each is provided with two attractive colors. 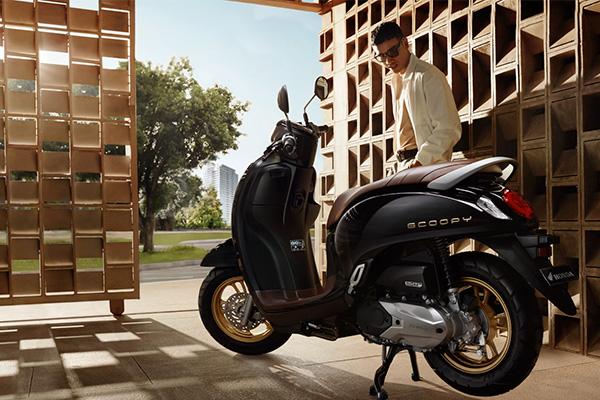 Moving to the cockpit. Although still adopting analog-digital, now the appearance is more modern. Please be careful not to confuse its dashboard with that of Honda CRF 150 L.The shape is still the same, only the contents are slightly different from the old model. Seen in the number format, graphics and shape of the LCD screen. The small screen under the speedometer is now able to display more complete information.

The new generation Scoopy now features real-time average fuel consumption, helping riders know their driving behavior. There is also Oil Change information, which tells you when it is time to change the oil and a battery indicator (highest type only). Do not forget also the ECO indicator which can be a guide for driving economically.

Unlike the previous model, Scoopy now uses eSAF frame technology. The frame model has actually been applied to Genio and Beat. The shape of the underbone frame from the front to the back is made slimmer. Designed using a plate that is bent and pressed, so that the shape is no longer rounded. The frame is made by a press production process and laser welding.

Another advantage of using this new frame technology is that the processing process is faster and easier. In terms of welding, it is very fast because it uses laser welding and this model chassis production system only takes one person. Obviously, they can cut the production line and don't need a lot of people, so the cost is cheaper. According to Honda, this kind of chassis or frame was first used in two-wheeled vehicles in Indonesia.

The manufacturer claims the frame of this model is 8 percent lighter than the frame of the old model. The effect was successful in making Scoopy less weight. Previously it was almost 100 kg, now the standard type is only 95 kg and the one using smart key is 94 kg. Because the weight is very light, the result is Scoopy easier to maneuver in narrow corners, even though for women.

Another advantage of the eSAF frame is that it is stronger because it has good durability compared to pipe frames. Based on internal tests, the chassis is more resistant to deflection (bending) while driving. The frame is stiffer and stronger. Because the shape is flatter, the tank and luggage capacity increases. Storage space under the seat is now 12 liters. The gasoline container, which was previously 4 liters, became 4.2 liters.

There is an update in the charger or power outlet. Now given a model of the USB socket type. So users no longer spend more to buy additional connectors. Of course it makes it easier for the wearer when the smartphone runs out of power. Just apply via the cellphone's default cable.

Especially for the Sporty and Fashion variants, they get an anti-theft remote and an answer back system. But the operation of the motor is still using conventional keys. On the other hand, to open the trunk, keep using the button next to the lock housing.

While the highest types (Stylish and Prestige) already use the Smart Key System. Technology to start the engine as a replacement for conventional keys. The level of security is increasing, and can minimize theft. The way it works is the same as in the Honda Vario. It remains only to activate the knob to start the engine, while the remote can be pocketed.

The new Scoopy model is given a Multi Function Hook. Useful for hanging luggage. Designed practically because it can be closed when not in use. Then the pillion footrest is now integrated into the body. Giving different nuances and aesthetically better.

The engine uses the latest and latest generation. The specifications, 110 cc 4-stroke SOHC eSP, air cooler with PGM-FI injection combustion system. There is a difference in the size of the bore x stroke, which is now made 47.0 x 63.1 mm and a compression ratio of 10.0: 1. The piston step is made longer to pursue acceleration. Moreover, coupled with a light weight, the motorbike is more responsive.

The new Scoopy power output is in the range of 6.6 kW (9.0 PS) at 7,500 rpm with a torque of 9.3 Nm / 5,500 rpm. You could say the power is slightly reduced compared to the old Scoopy. Even so, Honda claims its fuel consumption is economical. Based on Honda's internal data, the Genio's fuel consumption reaches 59 km / liter (ISS on).

This scooter offers more economical fuel consumption, because it has been supported by eSP and PGM-FI technology. The eSP technology is integrated with the ACG Starter, to start the engine smoother without sound, as well as the basis for the application of the advanced Idling Stop System (ISS) features. Allows the Scoopy machine to automatically shut down when it stops for more than 3 seconds. You simply pull the gas lever, then the engine starts again.

There are additional variants in the latest All New Scoopy 2021. If previously there were only two, now it is four. Now presented Sporty, Fashion, Stylish and Prestige. In total there are 8 colors provided. Each is distinguished by its graphics and completeness of its features. For the lowest variant (Sporty and Fashion) it costs IDR 19,950,000 and the highest series (Stylish and Prestige) is sold for IDR 20,750,000 OTR Jakarta.

Recommend a website where you can find car tax online: pajak kendaraan online . If you want to buy a car or motorcycle, this is a good place.

If you're interested with cars, come to see my blog! I am an editor of a car website.